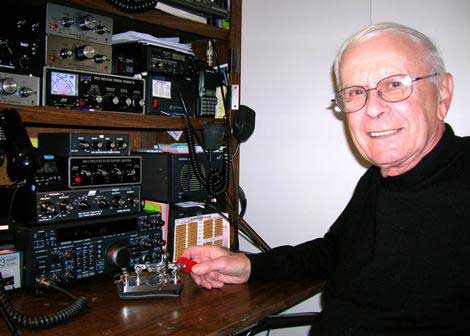 Dick earned his ham ticket in 1947 at age 16. His first shack comprised a homebrew 6L6 oscillator running 8 watts on 40 CW, a longwire antenna and an old, even in 1947, S20R. Since then, Dick has owned many rigs, but his latest is a TS-850S. For QRP CW operating he has five rigs (three MFJs, a Ten Tec 1340 and a HTX 100). The shack is very compact, a holdover from his apartment days, and boasts a recent upgrade to computerized logging.

Now licensed 64 years and holding an Advanced class ticket, Dick is not a serious DX chaser, but has worked about 160 countries. He is working toward DXCC/QRP and has earned WAS/QRP. He is a member of: SOWP, #5670M; Fists CW Club; WAC; WAS; QCWA; ARRL; RCC; A-1 Operators Club; and QRP/ARCI #10429. 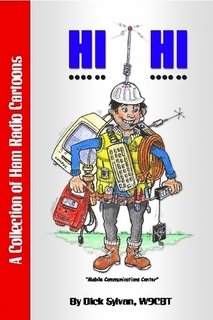 Dick served as a Navy radio operator aboard an APA (Assault Personnel) during the Korean era, and then served as an electronics technician aboard an AKA (Attack Cargo).

For the past 45 years, he has worked as an Industrial Design Consultant, designing all types of consumer products and packaging. He was Director of Design for the Hirsh Company in Skokie for 21 years, and for the past six years has operated his own Design Consulting Business. He is now retired.

In 2004, Dick joined the K9YA Telegraph as staff cartoonist. This Ham Radio publication features at least one of Dick's hilarious cartoons each month.

In 2005, Dick released his new book, HI HI — A Collection of Ham Radio Cartoons. HI HI provides solid 5 and 9 laughter. Drawing on six decades of on-air adventures, Dick offers an insider’s view of the bliss and twists of ham radio.